How to Trade Baidu on Strength Following Earnings Beat

Baidu (BIDU) reported better-than-expected revenue in its earnings report released after the closing bell on Wed., Oct. 6. The stock began November above its fourth-quarter pivot at $102.40. As a result, the stock ended last week with a positive weekly chart. This chart setup favored a positive reaction to earnings. My call is that the stock will “fill the gap” to its May 17 low of $126.91.

Baidu is a Chinese technology giant specializing in Internet applications including artificial intelligence. The company trades in the U.S. as an ADR (American depository receipts). In dollar terms the company took in $3.93 billion in revenue in its third quarter at the upper end of its guidance of $3.84 billion to $4.07 billion.

Baidu is trying to recover from the economic slowdown in China and the ongoing trade war with the U.S. On May 16, the company missed earnings estimates for the first time since it became a publicly traded company in 2005. In the May 16 report, analysts noted that Baidu has been losing market share to NetEase in the gaming space and was knocked off China’s five most valuable Internet companies.

The daily chart for Baidu 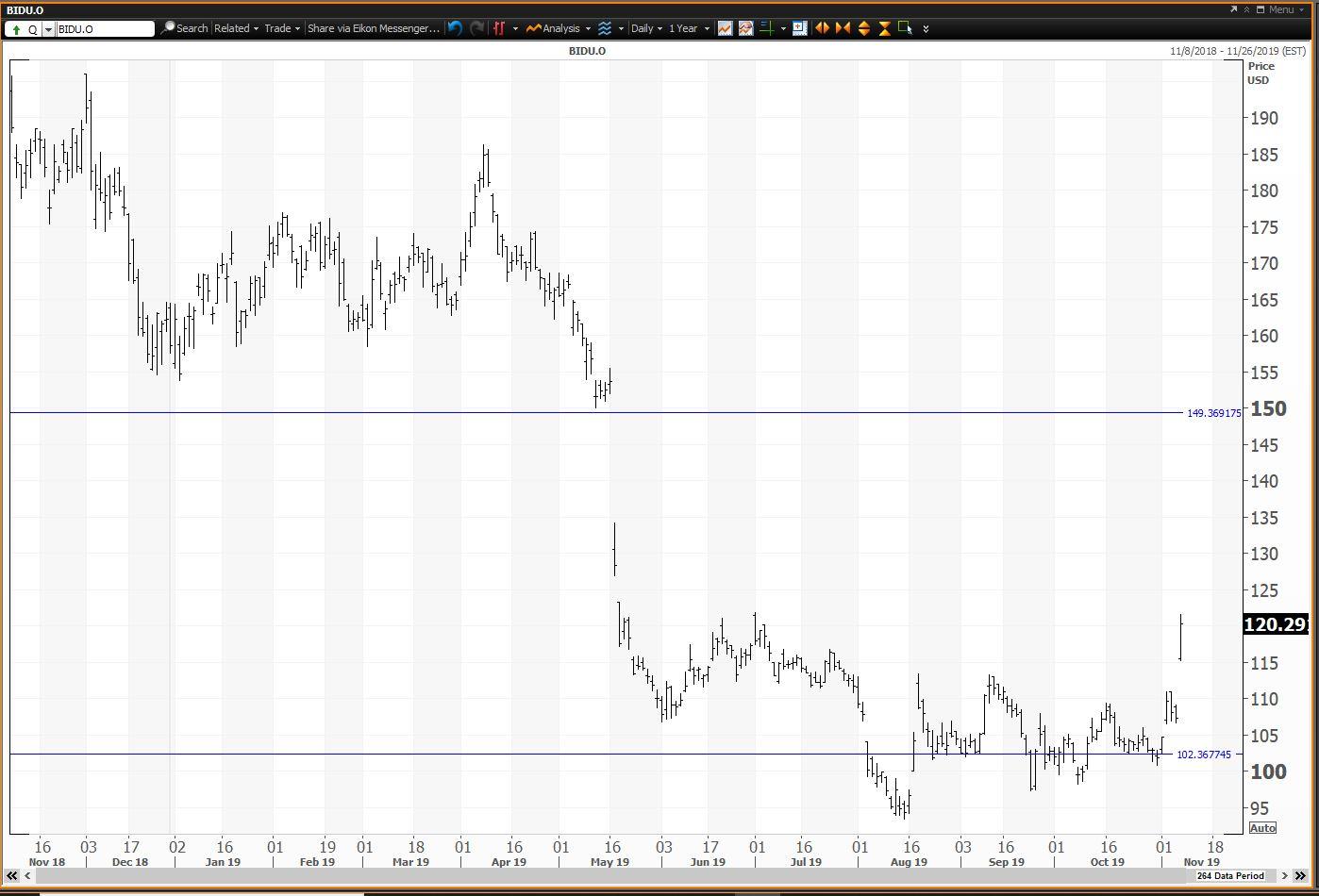 The weekly chart for Baidu 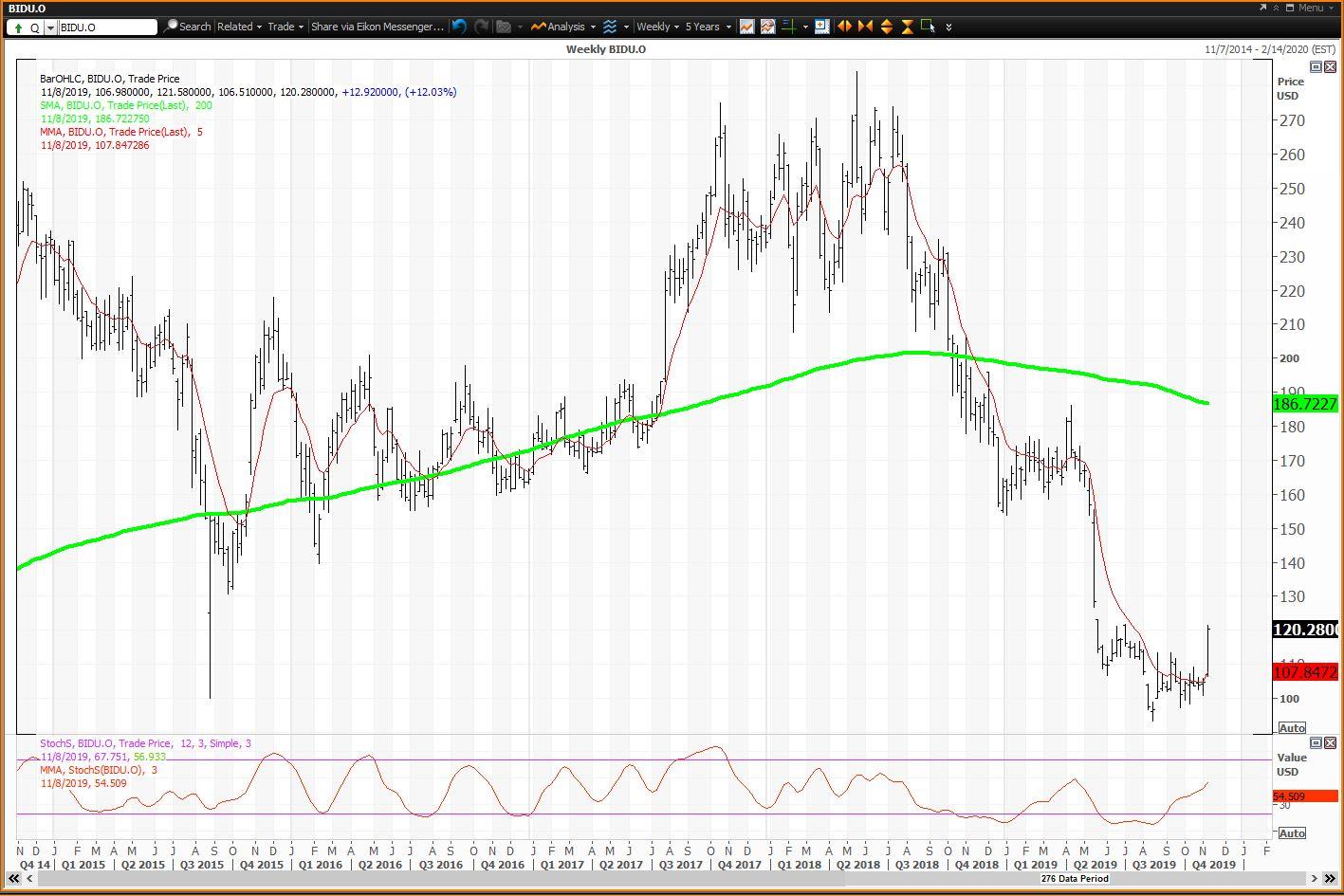 Trading Strategy: Buy weakness to the quarterly value level at $102.40 and reduce holdings on strength to the price gap to the May 17 low at $126.91.

How to use my value levels and risky levels:

Value levels and risky levels are based upon the last nine monthly, quarterly, semiannual and annual closes. The first set of levels was based upon the closes on Dec. 31, 2018. The original annual level remains in play.

The quarterly level changes after the end of each quarter so the close on Sep. 30 established the level for the fourth quarter.

The close on Oct. 31 established the monthly level for November.

My theory is that nine years of volatility between closes are enough to assume that all possible bullish or bearish events for the stock are factored in.

How to use 12x3x3 Weekly Slow Stochastic Readings:

My choice of using 12x3x3 weekly slow stochastic readings was based upon back-testing many methods of reading share-price momentum with the objective of finding the combination that resulted in the fewest false signals. I did this following the stock market crash of 1987, so I have been happy with the results for more than 30 years.

The stochastic reading covers the last 12 weeks of highs, lows and closes for the stock. There is a raw calculation of the differences between the highest high and lowest low versus the closes. These levels are modified to a fast reading and a slow reading and I found that the slow reading worked the best.

Recently I noted that stocks tend to peak and decline 10% to 20% and more shortly after a reading rises above 90.00, so I call that an “inflating parabolic bubble” as a bubble always pops. I also call a reading below 10.00 as being “too cheap to ignore.”

As Roku Plunges, CFO Advises Looking Past ‘A Bit of Noise’

Forget $50 – Is AMD Heading Even Higher?